In 2016, the W Scottsdale held an epic party where musicians including Mike Posner, CeeLo Green and Bebe Rexha played sets for hotel guests and attendees. The event, dubbed Wake Up Call, was a huge success for the hotel chain, so much so that W Hotels decided to bring it back as a fully fledged, traveling music festival for the second half of 2018.

“We know that music is really important to many of our brands here, as well as our loyalty members. Looking across all 30 brands there were two in particular that really popped for us this year with an opportunity to do something different in the music space,” Jennifer Utz, vp of buzz marketing and partnerships for Marriott International, explained. The first brand was W Hotels.

Beginning this September, Wake Up Call will return in full force with a three-day event at the W Hollywood from Sept. 1-3, followed by three days at the W Barcelona in late September and a trip to the W Bali in early October. Then, in 2019, there will be an event at the new W Dubai, The Palm. Each location was thoughtfully selected for its musical heritage. Each of the three hotels include a proper recording studio that artists can book to record albums, EPs and so on.

“We are kicking off in Hollywood because it is such an amazing music town and also a music media town. You think of all the recording studios, all the labels and the history of music in Hollywood. It’s part of the culture. The fact that that hotel has a recording studio and has hosted so many legendary acts in the past, from live performances by Maroon 5, recording artists coming in and actually using the recording studio, we thought it was a great way to kick off the festival,” Pablo Henderson, senior global director, brand marketing for W Hotels, said.

“I don’t know that there is another group that could be able to speak as authentically in the music space and put on a festival and for it to feel so natural. It’s expected to some extent because of all the other things we are doing with music,” Henderson added.

These aren’t simply concerts at a hotel that are marketed to be like a Coachella or Lollapalooza. Wake Up Call was created to be a new genre of music festival, designed to offer luxury perks to an exclusive group of guests. Henderson and his team see it as, “an opportunity to bring a W culture to life.” 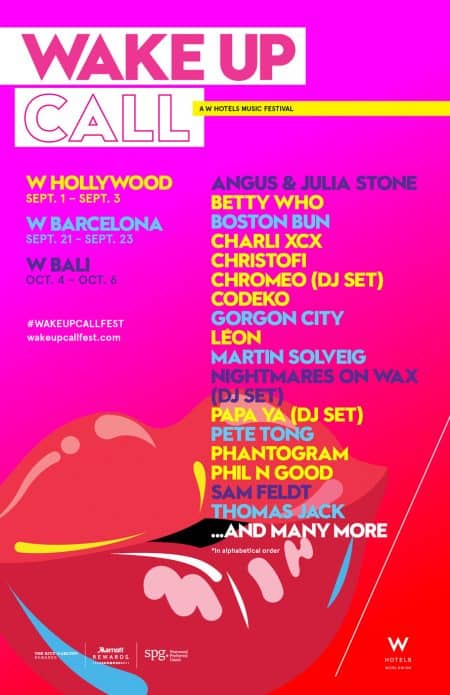 For the time being, W Hotels is selling tickets and rooms for the festivals exclusively to those signed up for any of the Marriott brand’s rewards programs (including Starwood Preferred Guest, Marriott Rewards and The Ritz Carlton Rewards). While some events will have extra tickets for purchase (again for rewards members only) most require that guests book a room at the respective locations. That’s a big part of what differentiates the experience from your standard festival.

Think about it. Say you get tired between acts, you can head to your hotel room for a quick nap. Feel like taking a dip in the pool while Charli XCX performs? Go for it. W Hotels is also leaning into the lack of long bathroom lines, which those that frequent music festivals are all too familiar with, as a selling point. Plus, the experience will have a special selection of food and cocktails (again without the horrendously long lines) for guests to enjoy. Fitness classes will also be offered as part of the hotel chain’s Fuel workout program.