A new debit card which lets you connect your existing debit and credit cards to it and can help with budgeting has now launched  but there are a couple of drawbacks to be aware of before you get one.

If you have a Curve debit card you can link all of your existing Mastercard and Visa debit and credit cards to it using the Curve app, to do your spending via the one card  though you can’t connect Amex cards to it.

You can see all of your spending in the app, which is available for iOS and Android, and it can also be used as a way of spending on your credit card in places that don’t officially take credit cards. Yet there are a few pitfalls to watch out for, including the loss of Section 75 consumer protection and overseas fees.

Curve was previously only available to business owners and had about 100,000 users. It has now launched nationwide, and anyone can sign up to the 50,000-strong waiting list.

For more information on the best card for you, see our Credit Cards guides.

What are the pros of Curve?

Curve is simply a debit card, so there’s no current account with it and no hard credit check when you apply.

Here are some benefits of using Curve: 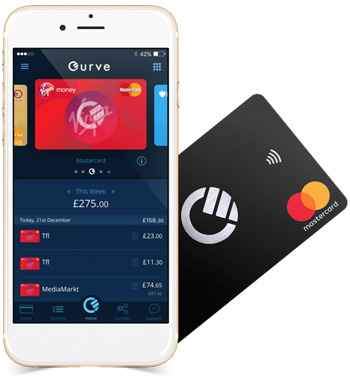 What are the cons of Curve?

While it does have several plus points, there are some things you need to be aware of when using Curve:

Get Our Free Money Tips Email!

So should I get it?

Curve is a good option if you’re happy with your existing bank and credit cards, and want to see all of your spending in one place to help manage your money. It can also cut down the number of cards you carry around with you  though you should always take at least one back-up option.

The card itself won’t actually save you money or, for now at least, earn rewards. You must also be aware of the potential pitfalls that come with using it  particularly the lack of Section 75 protection  and the fact it’s possible to get better features with other cards such as fee-free overseas spending and rewards with Amex.

How do I apply for Curve?

To get one of the cards you need to:

You then use your Curve card for all spending, and can change the card you use for each purchase. The app gives real-time notifications, and shows all of your transactions in one place.

The main Curve card is free to get and use in the UK, and the company has told us that there are no plans to introduce fees, though this could of course change in future.

A Curve spokesperson said it’ll be launching a new rewards scheme in the coming weeks  we’ll let you know if it’s decent when we have details. There is also a premium version of Curve, which costs a one-off £50 to get.

Existing customers with the premium version get boosted reward offers, but it remains to be seen what the new rewards programme will be.