When travelers are asked their favorite airline, Southwest often tops the list. With flyer-friendly policies like free checked bags and no change or cancellation fees, there’s a lot to like. And travelers don’t need to know many tricks to have a good experience when flying Southwest.

However, if you really want to get the most out of flying Southwest, you’ll want to get to know the Rapid Rewards program. Whether it’s simply earning points from flights or unlocking the Companion Pass, there are a variety of ways to enhance your Southwest travel.

Here’s what you need to know about the Southwest Rapid Rewards program.

Rapid Rewards members earn points when flying on Southwest, through Southwest credit cards and via travel partners. Some travelers may only bother to earn points through flying. However, to really want to rack up points, you’ll want to maximize all of the earning methods.

Southwest flyers earn Rapid Rewards points from flights based on the base fare of the flight and the type of ticket you buy:

As Wanna Get Away fares are the least-expensive tickets, most travelers are going to be earning 6 Rapid Rewards points per dollar of base fare on most tickets. However, if you get stuck buying a more-expensive fare, the good news is that you’ll earn up to double the number of points per dollar in base fare.

There are five Rapid Rewards credit cards—3 for consumers and 2 for small businesses:

Each card offers a slightly different set of benefits, points earning rates and anniversary account bonuses. Annual fees range from $69 per year on the Southwest Plus Credit Card to $199 each year for the benefits-packed Southwest Performance Business Credit Card.

Members can also earn points through the Rapid Rewards Shopping portal, Rapid Rewards Dining program, direct shopping partners such as 1-800-FLOWERS and Home Chef), home energy partners NRG and Reliant and even for giving your opinion.

Earn by Transferring Points from Other Programs

Southwest is a partner of two major transferable point currencies: Chase Ultimate Rewards and Marriott Bonvoy. Either can be viable options when you need to top off your Rapid Rewards account for a redemption.

Chase Ultimate Rewards points transfer to Southwest Rapid Rewards points at a 1:1 ratio and the transfer usually occurs immediately. Points can be transferred in increments of 1,000, so you won’t be able to top off your account to the exact number of points you need.

There are two major ways to redeem Southwest Rapid Rewards points: redeeming for flights or redeeming for gift cards, merchandise and more through the More Rewards portal.

Southwest doesn’t have an award chart. Instead, the cost of Southwest reward flights is tied directly to the cash price of the flight. That means there aren’t blackout dates for using Rapid Rewards points. If there’s a flight bookable with cash, you can book it with points. However, doing so may cost a lot of points if the cash price is high.

Officially, Southwest states that “reward pricing can vary based on the destination, time, day of travel, demand, fare type, point redemption rate and other factors.” However, we’ve cracked the formula to figure out how many Rapid Rewards points a flight will cost:

Using this formula, you’ll find that Rapid Rewards flight redemptions provide at least 1.28 cents per point in value. However, in practice, the redemption rate is generally between 1.3 and 1.5 cents per point. That’s because award travelers don’t have to pay some airport fees and excise taxes that are charged on cash tickets.

Booking this flight as an award redemption costs just 3,744 points plus $5.60 in taxes:

As you see, award travelers do still have to pay some taxes, fees, and other government or airport-imposed charges in addition to the points price. Thankfully, that cost is just $5.60 each way per person for most routes within the U.S. Flights to and from international airports generally have a higher out-of-pocket cost due to taxes charged by the country you visit.

Cardholders can redeem Rapid Rewards points for gift cards at a rate of 1 cent per point. At time of writing, there were 61 gift card options available for brands from American Eagle Outfitters to Zappos, though these can change at any time.

You can even book international air travel on other airlines, as long as Southwest doesn’t operate that route. As with the gift card option, the redemption rate is a surprisingly good 1 cent per Rapid Rewards point. 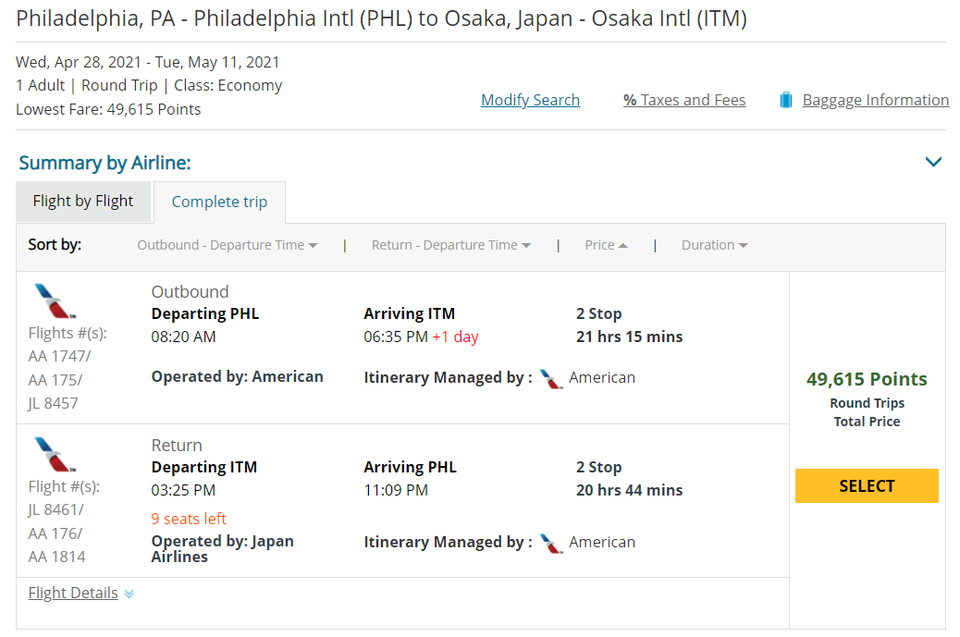 Do keep in mind that rules regarding baggage, changes, etc. will be those of the airline on which you redeem, not the more generous ones offered by Southwest.

Travelers don’t need Southwest elite status to get free checked bags or waived fees. However, Southwest does reward its frequent flyers with perks including an earlier boarding position and a dedicated check-in line.

Unfortunately for award travelers, only revenue flights count for earning qualifying flights and Tier Qualifying Points. In fact, the list of activities that don’t count toward earning Southwest elite status is quite long.

Upon earning A-List elite status, travelers are rewarded with:

Of these perks, priority boarding is likely to be the most appreciated. However, the bonus Rapid Rewards points can add up, and the same-day standby can come in handy when you want to catch an earlier flight. 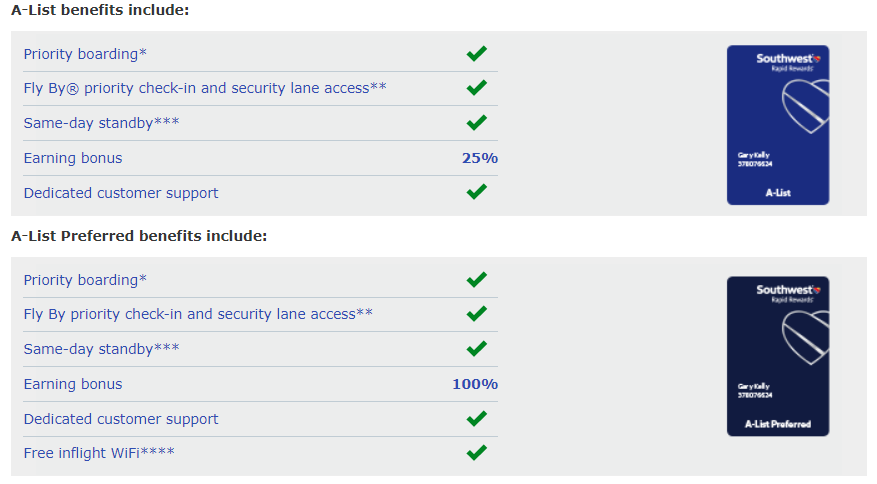 Rapid Rewards members who fly 50 qualifying one-way flights or earn 70,000 Tier Qualifying Points in a calendar year will earn Southwest’s A-List Preferred status. In addition to the benefits of A-List status, A-List Preferred elites receive an even better boarding position and perks including:

In addition to earning points toward award flights, Southwest members can get a boost toward earning A-List status by spending on most Rapid Rewards credit cards. For every $10,000 in purchases, cardholders earn 1,500 Tier Qualifying Points (TQP). Each eligible card offers cardholders the chance to earn up to 15,000 TQP from making $100,000 in purchases in a year.

This earning option is available on the following four Southwest credit cards:

Southwest is giving members an additional incentive to spend on Southwest credit cards in 2020. Cardholders will earn an additional 1,500 Tier Qualifying Points (TQP) for every $10,000 in purchases. That means cardholders will earn a total of 3,000 TQP per $10,000 spent on the first $100,000 in purchases. This offer is available between the first day of your billing cycle ending in May 2020 and the last day of your billing cycle ending in December 2020.

Many U.S. airlines lowered the threshold to earn elite status in 2020. Southwest took a slightly different approach. Instead of lowering thresholds, Southwest provided all travelers with an elite status boost to make it easier to achieve its status levels. These boosts should already be reflected in your Rapid Rewards account:

This effectively lowers the requirements for earning Southwest elite status in 2020 to the following:

One of the most valuable perks in the airline loyalty world is the Southwest Companion Pass. This pass provides a companion ticket to the Companion Pass holder for only the costs of taxes and fees. There are plenty of rules and strategies that go into earning and using this coveted perk. First, let’s cover the basics.

How to Earn the Southwest Companion Pass

To earn the Southwest Companion Pass, Rapid Rewards members need to either:

Unless you’re an incredibly frequent flyer, you’re likely to earn the Companion Pass through the points method. That means the most important aspect is paying attention to which points are Companion Pass-qualifying points. These include points earned through:

The list of ineligible points is long and includes purchased points, gifted points, transferred points (such as from Chase Ultimate Rewards), promotional or bonus points (except through Rapid Rewards credit cards) and purchased tier qualifying points.

How to Use the Southwest Companion Pass

The Companion Pass can be used from the date earned through the end of the next calendar year. So, to maximize the value you get, you’ll want to earn the pass as early in the year as possible.

Once you earn the Companion Pass, you’ll need to designate your companion in your Rapid Rewards account or by calling Southwest at 1-800-435-9792. When you do, Southwest will send you a membership card in seven to twn business days. Companion Pass holders can change their companion up to three times each calendar year.

In addition to the boost that Southwest cardholders got for A-List elite status, Southwest also gave members a boost toward earning the Companion Pass. All Rapid Rewards members have received:

Southwest rewards its loyal travelers with rewards ranging from points toward future flights all the way up to more than a year of companion tickets with the Companion Pass. In order to earn any of these rewards, you’ll need to be part of Southwest’s Rapid Rewards program. By using the tips and tricks we shared in this article, you’re on your way to getting the most from your Southwest flights.